How many schools have a highly respected author on their staff? 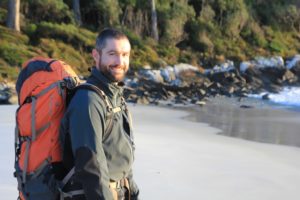 We are proud and fortunate to have such a talent as Dr Nicholas Clements, a History, Philosophy and Psychology teacher on our Senior Campus. During NAIDOC Week we wanted to share Dr Clements journey from studying to writing and teaching and the inspiration behind the books dealing with the history of the Tasmanian Aboriginal communities that he has written.

I became a teacher quite by accident, and by a very circuitous route. After completing a metalwork trade, living overseas, breaking my back in a diving accident, and belatedly discovering a love of learning via a UTAS arts degree, I won a scholarship to do an Honours project under the eminent historian, Henry Reynolds. I was to examine Aboriginal representation in the colonial newspapers. It was my first glimpse of the tragedy lying just beneath Tasmania’s surface, and it convinced me to play a part in sharing this with a wider audience, not least because a book by Prime Minister Howard’s ‘favourite historian’ had just come out denying most of what had happened here. I set to work. Honours became a PhD and a PhD became a book, The Black War, published in 2014.

Finished with Van Diemen’s Land, or so I thought, I hung up my historian’s hat and began teaching at Launceston Grammar. It was the right choice. I got paid to talk about stuff I love to students I like in a school that supported me – it was the dream! I’d like to offer you a deeper, more sophisticated reason why I do what I do, but there isn’t one.

In 2018, however, I put my historian’s hat back on teaming up with Henry Reynolds to write a biography of an unknown but incredible Tasmanian warrior. Tongerlongeter: First Nations Leader and Tasmanian War Hero came out last year. Here is his story in brief. Both as collaboration and as a publication, the project was the most gratifying of my life, not least because Australians are starting to see that Tongerlongeter deserves to be recognised as one of our greatest war heroes. Our hope is that this man, who fought to the last on his country and for his country, will eventually be memorialised as a patriot and hero comparable in standing to those Australians who distinguished themselves in overseas campaigns.

But for now, and for the foreseeable future, I have only one professional interest – talking about stuff I love to students I like in a school that supports me.

You can find out more about Dr Clements’ books by clicking on the covers.