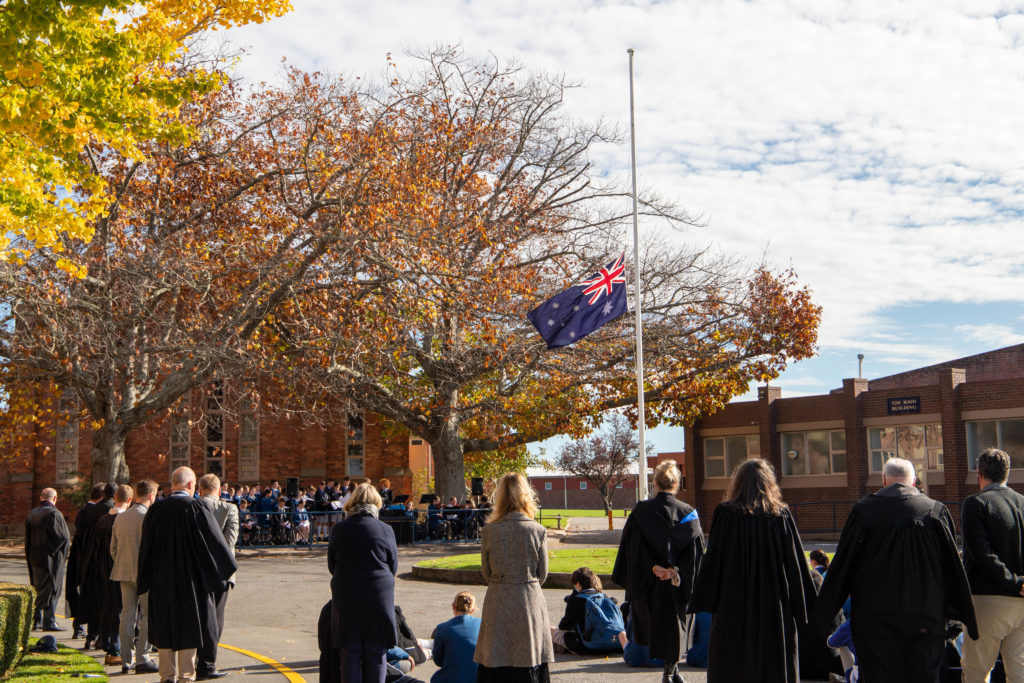 The Anzac Commemoration Service was held today at the Senior Campus. Our new Chaplain Reverend Matthew Pickering has been a warm and thoughtful addition to the Senior Campus and wanted to share the following speech from Head of Boarding, Ash Keatch with the Launceston Grammar community. In these challenging times, Reverend Pickering felt that there were some important messages that Mr Keatch touched upon in his speech that would have an impact on our lives today.

When war broke out in 1914 Australia had been a federated nation for only 13 years, and its government was eager to establish a reputation among the nations of the world. When Britain declared war in August 1914 Australia was automatically placed on the side of the Commonwealth. In 1915 Australian and New Zealand soldiers formed part of the expedition that set out to capture the Gallipoli peninsula in order to open the Dardanelles to the allied navies. The ultimate objective was to capture Constantinople (now Istanbul), the capital of the Ottoman Empire, an ally of Germany.

Back here at Grammar, there was a new principal Frank Shann who was involving parents in school life. Two Parents Conferences were held at which parents conferred with masters over their son’s progress and discussed topics such as the reason for school rules and the possibilities for cooperation with parents were conducted. It was new for Tasmanians and as they were adjusting to these changes Gallipoli broke out.

The 12th Australian Infantry Battalion was one of the four battalions, along with the 9th, 10th and 11th, which made up the 3rd Brigade.

Half of the men in the battalion were Tasmanian, the other half South Australian and Western Australian.

It was one of the first battalions established for the Australian Imperial Force or the (AIF) as it was famously known in the First World War.

Before dawn on 25 April 1915, the first soldiers of the Australian and New Zealand Army Corps landed on the shores at what is now called Anzac Cove on the Gallipoli peninsula. Lieutenant Duncan Chapman of the 9th Battalion from Maryborough Qld was the first to step foot on the shores, he along with the rest of the 12th Battalion was also on the front line at the Gallipoli landing, being the first to arrive at ANZAC Cove in the early hours of the morning on 25 April 1915.

As they charged, the roar went up from dozens of Sons of the Southern Cross: Come on, Australia! Australia forever! Come on boys! Give it to em Boys!, could be heard as they clicked on their bayonets

Private Basil Wilmer from Carrick in Tasmania would later report of the awful climb up almost perpendicular sandy cliffs. All around, the Australians are forming their first impressions, with another Tasmanian soldier later quipping, “it was bloody poor farming country.

For many Launcestonians the war suddenly became more serious. In assembly at school, the deaths of ten boys were announced and by the Armistice in 1918, 504 Old boys of both Grammar and Launceston High had enlisted and 97 were killed. This was an enormous number with a large percentage of families having members at war and many boys still at Grammar School had older brothers there. This meant that the war had an immense impact on the school.

For the vast majority of the 16,000 Australians and New Zealanders who landed on that day, it was their first experience of combat. By that evening, 2,000 of them had been killed or wounded. It was a day of confusion and fear. One soldier called it “a day of sorrow’ as he remembered the dead and wounded. At Anzac Cove, the Australians were the first to land, in fact, the New Zealanders followed later in the day. They advanced about a mile in some places, less in others, but they could go no further.

In August 1915, the 12th battalion participated in the attack on Lone Pine, an attempt to take the third and fourth lines of the Turkish trenches.

Ken Mackay was part of D company 5th Battalion 3rd Brigade always proud of his Old school and truly glad to be amongst the Old Boys doing their duty in the Empire’s hour of need. He was on observation duty in one of the newly captured trenches of lonesome Pine when he evidently exposed his head and a bullet struck him in the forehead killing him instantly.

The 12th Battalion occupied Gallipoli right up until the evacuation in December. 8 months after they landed.

In December, the Anzacs were evacuated. By then, about 8,700 Australians and almost 2,700 New Zealanders had been killed. They were some of at least 130,000 soldiers on both sides who lost their lives at Gallipoli.

It is often suggested that the Dawn Service observed on Anzac Day has its origins in a military routine still followed by the Australian Army. The half-light of dawn was one of the times favoured for launching an attack. Soldiers in defensive positions were woken in the dark before dawn, so by the time first light crept across the battlefield they were awake, alert, and manning their weapons; this is still known as “stand-to”. As dusk is equally favourable for battle, the stand-to was repeated at sunset.

After the First World War, returned soldiers sought the comradeship they had felt in those quiet, peaceful moments before dawn. A dawn vigil became the basis for commemoration in several places after the war.

Anzac Day has been one of the most important dates on Australia’s calendar since 1916. At first, it gave people a chance to honour the original Anzacs – the Australians and New Zealanders who fought in Gallipoli. Then it became a day for those who had served in

On Anzac Day we are drawn to memorials, marches, to moments of reflection – both in groups and privately.

Anzac Day has become an occasion to honour all who have worn our country’s uniform in service. Today, we reflect on that service. We recognise more than a hundred thousand Australian servicemen and women who have lost their lives in military operations carried out in our country’s name. We honour the values that have been invested in the original Anzacs – mateship, endurance, courage and sacrifice – and the ways in which later generations have measured their own achievements against those of the soldiers who fought on Gallipoli.

The Anzac legacy wasn’t etched in stone at Anzac Cove. Each generation has built upon it.

Courage and sacrifice – characteristics of the Anzac legacy.

Major Irene Drummond, the most senior of the nurses massacred on Bangka Island in WW2 1942. Her words to her nurses as they all faced certain death, “Chin up girls, I’m proud of you and I love you” speak to her own bravery and compassion.

Mateship – another characteristic of the Anzac legacy.

The harsh environment in which convicts and new settlers found themselves called for communities of men and women to rally together and rely on each other during hardship. In Australia, a ‘mate’ is more than just a friend and often implies a sense of shared experience, mutual respect and unconditional assistance.

The concept of mateship has woven its way into the Australian fabric, so much so that we often use it as a way to describe our national identity: what it means to be ‘Australian’. This may be why on the battlefield, for Australian servicemen and women, there is no greater fear than the fear of letting your team, or your mates, down.

In the last few moments before the bloody attack upon Lone Pine in Gallipoli when the 3rd Infantry Battalion was crowded on the fire steps of each bay in its old frontline trench waiting for the final signal to scramble over the sandbags above, a man with rifle in hand, bayonet fixed came peering over the trenches below. ‘Jim here?’ he asked.

A voice on the fire step answered, ‘Right, Bill, here. Do you chaps mind shiftin’ up a bit,’ said the man in the trench. ‘Him and me are mates and we are goin’ over together.’

“Mateship meant everything,” he said quietly. “The commemorations are an opportunity to pay tribute to those who lost their lives, and those who were wounded I was a lieutenant with 30 men under me, and later a captain and you had complete faith in the troops, but mateship, that was everything.”

We see them in the service of our modern veterans and those still serving. They have inherited the Anzac legacy and, through their service, have added to it and will hand it forward.

The characteristics are not confined to our people in uniform. They are evident today in the actions of normal Australians. This was evident recently in flood-affected communities in South-East Queensland and northern New South Wales. Countless acts of bravery have occurred, most anchored in mateship in its many forms and exemplified by courage and endurance.

Those common characteristics and values – mateship, endurance, courage and sacrifice are not unique to military service. Our forebears took them into uniform. But their service, experiences and sacrifices have forever embedded in our nation’s DNA.

Who we aspire to be

If we learn from the Anzac legacy and if we continue to live up to it, history tells us that we can overcome any challenge.

The Anzac legacy is not reflected in a single individual or a single event. Instead, it is the sum of thousands of stories. Of ordinary Australians who, when given a job to do, got it done, did it in a way that made us proud and looked after each other during and after.

Finally, the characteristics that we take from the Anzac legacy to define us – mateship, endurance, courage and sacrifice – are inherent in Australia. They always have been. They’ve been strengthened and reinforced in conflict and on peacekeeping operations, but they have always been at our core.

They speak to our past, our present and our future.

To who we were, who we are and who we aspire to be.

And that should make us all optimistic for our future.